IS A PLATFORM TO PRESENT MUSIC ON AN EQUAL AESTHETIC AS DISCURSIVE LEVEL. THE PRESENTED WORKS AIM TO EMPOWER ACTIVE LISTENING, CONTEMPLATION AND THOUGHT. THE MUSIC DISSOCIATE FROM COMPOSERS AND THEIR TECHNIQUES AND STANDS ON ITS OWN, ALBUMS ARE CREATED OUT OF A READING OF ZEITGEIST, RESULTING ON THE MOST LONG-LASTING AND ANTIQUE SOUND CARRIER (TON TRÄGER) AVAILABLE: VINYL – AND IN RESPECT TO CONTEMPORARY LIFE, AS FILES (LIKE OIL PAINTING AND ITS DIGITAL APPEARANCE). COVERS ARE DESIGNED BY STEPHANIE RODERER (PINGPONG.COM) REFLECTING THE PRESENTED CONTENT ADDING TO IT ANOTHER LEVEL. THE ALBUMS ARE LIMITED TO 300 COPIES. THE EDITION WAS PARTIALLY FUNDED BY THE CULTURE OFFICE OF BOLZANO I/EU, AND SUPPORTED BY THE CONTRIBUTORS AND AUTHORS OF MUSIC, COVER-DESIGN AND SOUND-ENGINEERING. THE EDITIONS BASE IS PANKOW/BERLIN/D/EU.

THE NAME ALMENRAUSCHEN DERIVES FROM THE AURAL SENSATION PERCEIVING A NON INTENTIONAL SOUND WORLD AND TRANSFORMING IT TO MUSICAL SENSE-MAKING.

VITAL WEEKLY number 1204
KLAUS JANEK – CASPAR (LP by Almenrauschen)
KLAUS JANEK – THREE SEASONS (LP by Almenrauschen)
KLAUS JANEK – INFINITE BANG (LP by Almenrauschen)
Often I feel a bit reserved when I put a CD of solo recordings in my player; afraid that things might become boring, one dimensional, etc. But in the case of Klaus Janek, there is absolutely no reason to be afraid of this. Also when it is your opinion that the double bass isn’t such a rich instrument.
Janek opens a wide range of possibilities that find their way in some intriguing compositions. Music that is deeply emotional and human, fascinating and frightening. So I soon felt absorbed in his musical worlds. What a voice! Born in Bolzano, in the north of Italy, Janek is based in Berlin for many years. In his early years, he studied soprano and alto flute, trumpet as well as classical percussion. He started in local rock and jazz bands. Since 1988 he concentrated on double bass, studying with Mauro Muraro among others, and participated in workshops with Dave Holland, Butch Morris and Peter Kowald. Since the 90s he is into avant-garde and improvised music with a special interest for thecombination of double bass and electronics. Besides he composes music for cinema, theatre and dance productions. He released the core of his (solo) work so far on 5 albums, all to be released in 2019. This edition is titled ‘Almenrauschen’, a name that may by an allusion to the mountains around Bolzano where Janek grew up. Anyway, three of the albums are out so far. All solo ones. ‘Reciprocum’ and ‘Prospecting’ will be released later. Recordings for ‘Caspar’ took place on several occasions in the ’90s, spanning some four years. The album was first released in 2001 for Solponticello. It was his debut recording. It is a work in seven parts. Janek was inspired by the life of Kaspar Hauser who grew up imprisoned. Once set free he perceived reality, ordinary phenomena like trees and birds in a completely distorted way from what was common. He had to develop his way of deciphering, etc. of what he perceived. This story
inspired Janek trying to discover newpossibilities from a radical approach. He creates beautiful drones, contrasted with restless bowing and plucking, etc. At moments Janek also sings. At one moment he sings unison with the double bass playing a melodic line. Or he screams and howls, or tries some throat singing techniques. Also, some – accidental – environmental sounds pop up at a few places. Part four has Janek playing in an extremely sharp and dynamic way. Vibrant and dramatic improvisation by a player he puts his soul into his playing. The lp closes with a beautiful jazz composition, ‘Prayer Beads’ by American bassist and composer Marc Johnson, with Janek playing with deep and warm sounds. ‘Three Seasons’ was recorded live in February 2003 in Berlin. He plays the composition by Janek on contrabass. For this composition in six parts, Janek is inspired by what we go through inthe case of a loss: fighting it, accepting it, etc. So here Janek evokes moods and emotions. Again Janek impresses the listener with very sensitive playing; making poetry of the dramatic experiences that inspire him here; a musical meditation on the human condition. The opening of ´Winter part 2´ is one of those places where Janek creates some very specific sounds and sonorities. ´Spring´ starts from a repeated pattern that is coloured in different ways before Janek accelerates and works towards a peak of baffling intensity and beauty. Ending with a melodic coda; a very lively and expressive statement. The third album, ‘Infinite Bang’, was also live recorded at Klanggalerie, Berlin. Recordings took place in November last year. This time Janek takes inspiration from the book ‘Solaris’ by Polish author Stanislaw Lem. It resulted in one lengthy composition of over 45 minutes that has Janek playing double bass and electronics. After an acoustic start, the work continues after a few minutes on another plain with looped and processed sounds from the double bass. After a while, the double bass engages with the electronic environment and so on. Compared with the two other albums this one is even more abstracting from conventions. His approach here is more reduced to a pure sound investigation; a very proportionate and effective combination of acoustics and electronics. It is multi-layered but there is no overkill. At moments his bass sounds like a creepy, screaming voice. An impressive work. These releases convincingly illustrate that Janek is an important player open for experiment and with a story to tell. Very relevant and urgent stuff. (DM)

VITAL WEEKLY number 1216
KLAUS JANEK – PROSPECTING (LP by Almenrauschen)
KLAUS JANEK – RECIPROCUM (LP by Almenrauschen)
In 2019 Klaus Janek, a Berlin-based composer, contrabassist and researcher released a set of 5 albums of his solo and collaborative work. First three albums (‘Caspar’, ‘Three Seasons’ and ‘Infinite Bang’) we reviewed here earlier. Now we are focusing on the two other albums that complete this special edition called ‘Almenrauschen’, namely ‘Prospecting’ and ‘Reciprocum’. Compared with the earlier reviewed albums from this edition, these albums show Janek not so much as an accomplished double bass player, but far more his activity in the field of electro-acoustic music. The album ‘Prospecting’ contains duo works by Janek with Milena Kipfmüller as Sounding Situations. Kipfmüller is a sound artist, producer, theatre dramaturge, interested in developing new forms of ‘performative and live radio play’. ‘Violeiros Revisitados’ is built from recordings of traditional Brazilian vocal music by the Violeiros, dating from the 70s and looped sounds. Janek adds nice solo lines on contrabass. Through processing, this is finished in a warm sound work of deep sounds. Similar for  ‘Recorded Recorders’ that starts with a fine solo by Janek, accompanied with deep and low sounds that evolve along with cyclic procedures. The work develops along with a deep echoing cadence, centred around a hypnotizing pattern. Again the sound material is of imaginative quality. Both are very intensive and moving works. On the B-side, we find ‘Echolot-Montreal/Sao Paolo’. Echolot is a performance installation by Kipfmüller and Janek, presented in Montreal (2016) and Sao Paolo (2017). Non-musical material of spoken word (French and German) is the main ingredient in this work that can be situated between audio play and music. Again a truly absorbing sound work where they successfully investigate into the musical qualities of the spoken word. The album ‘Reciprocum’ contains one giant work in two parts. The first part is based on recording sessions by Janek with Heiner Reinhard, Willi Kellers, Andy Graydon, Nils Ostendorf, Biliana Voutchkova, Mark Weaver and Christian Pincock that are reworked and assembled by Janek into one work. The second part is based on recordings sessions of Janek and Nicolas Wiese, William Bilwa Costa, Luca Marini, among others, processed by Milena Kipfmüller. Both Janek and Kipfmüller manage to integrate these recordings into one organic (meta-)musical work. Sometimes the original recordings are treated beyond recognition, sometimes not. Also, the length of the outtakes is very different. There is a very long one with fantastic violin playing by Voutchkova. It is impressive how Janek and Kipfmüller take up these improvised sections in a new musical context. For sure we are dealing here with multi-layered and multidimensional works by two artists who have a strong musical vision of what they aiming at. Music that fascinates from start to finish! (DM)

Bass is the place 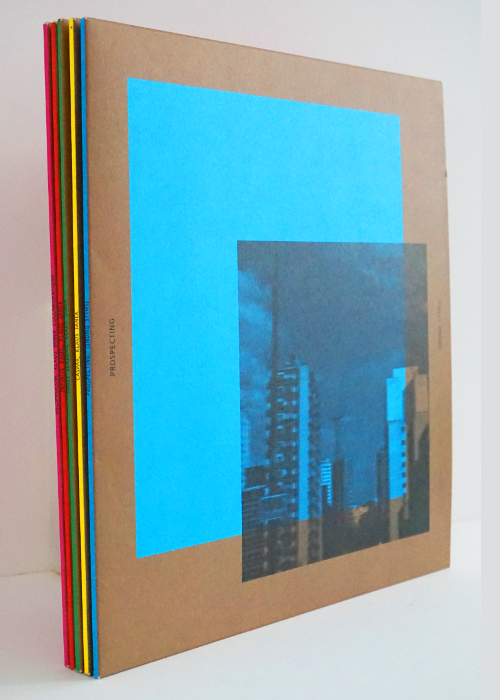 Klaus Janek, a German double bass player, improviser and composer with Italian roots (also a Slavic name!), Celebrated his 50th birthday last year. We not only know in the editorial office that this is a good time to make a life (here, artistic) resume.
For this noble occasion, the musician has prepared a five-disc set of his recordings, both those of the early 90s of the last century, as well as completely new ones made in recent years. Thanks to the support of the Italian taxpayer, this editorial package was successfully dressed in a beautiful set of black vinyls with homogeneous, stylish covers. The publisher of the whole – it is possible that founded for the needs of this venture – was named with a lowercase almenrauschen.
The artist, who works a bit on the edge of the mainstream improvised music, is a significant figure of the Berlin music scene, perhaps he is more widely perceived in the field of broadly understood contemporary music. Nevertheless, with a set of CDs that we will discuss in a moment in detail, Janek absolutely fits into the current of an intriguing, fully emancipated, improvising double bass of the European music scene. So, if you haven’t come across this musician yet, you have a unique moment to catch up and join the club of enthusiasts of his work without a shadow of a doubt.
Caspar
Recordings for double bass (fully acoustic) made in 1994-1998, with most of the material from June 1997. Eight episodes, which the musician defines as compositions (including one foreign), we complement the image for the sake of clarity – examples of structured improvisation (music originally released on CD by the label Solponticello, 2001).