In 2001 the coincidence was the invitation of KJ by Scott Currie, coorganizor of the vision festival, for the participation in Bill Dixons orchestra, playing his piece “index”. Because the rehearsals being distrubuted on one month there was time for KJ to go on tour with his “Caspar”. A big help of organisation came fom Peter Kowald. The  tour was done using Greyhoud buss services, the bass travelled inside a flightcase – it was quite spectacular as you see on the photos. In following cities concerts took place:

Visionfestival as part of the VF Orcestra directed by Bill Dixon, playing his composition ‘index’ 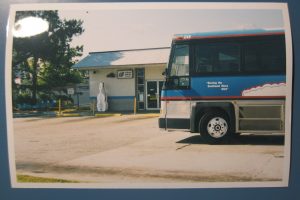