The moment – hard to be in it, even harder to catch it. The Duo Ige*timer has dedicated itself absolutely to that search of the moment. Klaus Janek and Simon Berz let their music grow out of the situation surrounding them. They’ve been on a tour through the States and at the concerts in Baltimore, Philadelphia and New Orleans they switched their recorder on. The three pieces on Ice Cold Pop are a documentation of their perception of these cities. Nothing is preset and nothing ist reused. Klaus Janek plays double bass and laptop and Simon Berz his handmade analog sound generators, electroacoustic drumsticks and whatever material he found on the journey and decided to use as an instrument. The pictures of the filmmaker Michelle Ettlin are inspired by these cities, the people and the music and make this journey not only audible but also visible to us. The project Ice Cold Pop is probably the most artful way to set up a travel documentation. 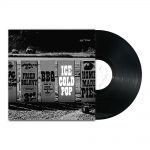 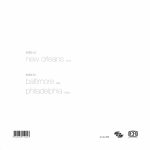 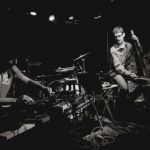 The otherworldly scraping, chiming, bellowing, whistling and underwater groaning of the 17-minute “New Orleans” might seem abrasive or annoying to some less-patient listeners. But that age-old complaint “it’s not music” will find no purchase here.

There’s no denying that these dense and dark avant-garde improvisations by this Berlin-based duo are music, and some pretty amazing music at that. The three extended cuts on this EP are named for the American cities in which they were recorded live. Double bass and laptop player Klaus Janek and multi-instrumental manipulator Simon Berz weave a tapestry of experimental sound that is always compelling, and never a pointless wank.

Elsewhere on “New Orleans,” we hear what sounds like a dented melodica, some shallow trap drums and an electric drill; the pretty noises are often juxtaposed with the un-pretty ones, creating dramatic tension. “Baltimore,” in contrast, is a quieter journey through the dark recesses of the heart, anchored in metronomic industrial sounds that might fit well in a David Lynch film. The lighter, comforting drone of “Philadelphia” could be compared to the cooing of some exotic zoo animal, against which Janek bows his bass, creating high flutters, low rumbles and cacophonic blasts.

Fans of artists as diverse as Jesu, Einstürzende Neubauten and Nurse With Wound likely will find this work interesting, while one might also suspect Dave Holland’s free-jazz milestone Conference of the Birds as an influence.

by Ed Pinsent – The sound Projector

Real-time instrument playing mixes up with laptop manipulation and live electronics on Ice Cold Pop (EVEREST RECORDS ER_LP_036), realised by the duo of Klaus Janek and Simon Berz performing as Ige*Timer. Janek’s acoustic double bass is fed through one of Toshiba’s finest pieces of hardware, while the Berz half of the act turns on his “analogue sound generators” while wielding a pair of “electroacoustic drumsticks”. He also picks up pieces of junk on his travels (bracelets? railway ties?) to use as percussive objects in the act. This record documents them doing all the above in live situations on a recent tour of the United States. A bit of a meandery listen, but it’s good to hear some authentic performing skills underpinning the work, and some of their errant sonic combinations really catch fire. The title of the LP refers, I assume, to a particular American frozen sweet snack rather than to a genre of “glacial” pop music.