I first came across the story of Kaspar Hauser in 1988, and it occupied me for the next ten years. During this time, I investigated various sound and dramaturgical aspects, while at the same time searching for and finding a language that would express my version of Kaspar Hauser’s story. For me, the story concerns the psychological and emotional world of Kaspar Hauser from his birth and imprisonment, through his release,  and, ultimately, to his death. The pivotal moment in my interpretation is his release, where he initially loses himself in a world of superstimulation, before learning to decode the manifold stimuli. A situation analogous to that of someone listening to abstract music and finding a way in.

rereleased in 2020 in Vinyl (almenrauschen) here

Bill Campbell / ink19   Janek plucks, bows, bends, and warps the bass in ways that are almost pornographic…Then, when you realize that this is not the product of effects pedals or any overdubbing, your mind is blown….It leaves you a spectator to Janek’s mastery over his instrument…

drimala records  This elaborate, highly visual piece is a milestone in the doublebass repertoire. Comes with our highest recommendation.

Andrew Magilow /splendid   …Janek’s work will not be a fatal waste of time, but the beautiful discovery of a passionate musician who has an innovative viewpoint on an age-old instrument’s infinite capabilities.

The Solponticello label’s output so far has consistently managed to surprise and delight critics. Right from release number one, their output has received the type of acclaim very few labels could even dream of. And Caspar is no different.

Musically documenting the life experiences of the tragic Kaspar Hauser, Klaus Janek’s album is an extraordinary feat, especially considering the only instrument he uses (yes, this is a purely solo venture) is the infamous double bass. And not only that, this is entirely live; no editing took place. With those facts in mind, it’s amazing to consider just how many different sounds and styles Janek can squeeze out of his instrument. Thumps, booms, scrapes, strokes, and even the occasional squeal can be heard. The effects are mesmerizing.

Parts I through VII are like an unwinding story. At times it’ll be frustrated and urgent (Parts IV and I are prime examples), and at others it will be loose and more subdued (the jazzy bass-and-scat combination of Part III is brought to mind). “Prayer Beads,” meanwhile, is the odd one out. Finishing the album in a deceivingly light mood, the Marc Johnson composed piece sees Janek actually using his instrument in a more traditional manner. Bizarrely, though, it goes perfectly with the other pieces and really ends the album off in good style.

As an album, Caspar is very successful. It is clear that Klaus Janek is a prime force on the avant-garde double bass scene (which has recently gotten much attention thanks to bassists such as Mark Dresser and Dominic Duval). It will be interesting to see how his next release turns out.

A lively double-bass solo LP from this Italian improvisor and musician. Very energetic “sawing” motions and actions are faithfully captured on the excellent recording, which adds to the intensity of the performance. The preence of the instrument and the man fills the room. A very raw production, with no edits nor overdubs in sight. I notice this release is intended as another musical homage to Kaspar Hauser, although unlike our Italian electronic friend Andrea Belfi, Klaus makes no mention of the Werner Herzog movie and refers exclusively to the actual presence behind this “tragic histroric figure”. The Kaspar Hauser myth of the “inncoent” who grows to maturity inside a prison cell and is released into the world as an adult is not uncommon, although this manifestation takes place in Europe in 1830 and is a true story. Certainly, this sympathetic record does its level best to portray some of the circumstances of Kaspar’s plight; in particular the utter isolation, the claustrophobia of his living quarters, and the limited range of his half-formed thoughts going round in circles. Which isn’t to say the music is eigher futile, or limited; but it does manage to enter into the childlike state of mind which is so crucial to understanding this theme.

Could this be the next manifestation of Rob Wasserman? The grandson of Mingus? The disciple of a psychotic Ron Carter? These questions can only be posed but not answered on Caspar. However, if you ever wanted to know how many sounds an acoustic bass could possibly make, this disc will answer your query. Janek plucks, bows, bends, and warps the bass in ways that are almost pornographic. It’s almost difficult to wrap one’s head around. Then, when you realize that this is not the product of effects pedals or any overdubbing, your mind is blown. Of course, as with so many free jazz projects, Caspar is completely an intellectual journey — for melody or any notions of a song are not really entertained on this disc. It leaves you a spectator to Janek’s mastery over his instrument as opposed to a participant in the beauty of his music. So, if you’re a fan of the spectacle, this is definitely a disc for you. If you’re looking for something to hum to, well, look into some Ray Brown.

This CD simply is superb. The art of the double bass has been developed in avant-garde territory by the likes of Peter Kowald, Mark Dresser, and Dominic Duval. All three showed how wide the huge instrument’s palette of sounds and emotions was. Klaus Janek tapped right into this legacy to deliver a moving solo album, Caspar. He bows, plucks, scratches, elongates notes into drones, feverishly plays until you don’t know what instrument he plays on anymore, and occasionally uses his voice to add an extra human touch (a technique Kowald pioneered). The eight pieces were recorded over a four-year span, with the bulk of the music coming from a three-day session in July 1997. The CD finally came out in 2001. The first two parts expose different extended techniques well integrated in the course of short improvisations. “Part III” introduces the voice over a jazzy melody that gradually gets out of control. The longer “Part IV” comes back to atonality and noise-based performance, while featuring a level of passion one usually finds only in Joëlle Léandre’s recordings. The 13-minute “Part VI” is more thoroughly composed and varied, taking the listener through a number of climates and climaxes. The album ends with Marc Johnson’s “Prayer Beads,” a deceptively simple jazz tune. It creates a beautiful contrast, the perfect way to conclude this CD. Janek’s playing deserves to be heard. Strongly recommended.

Since its launch, few independent mini labels have had the power to launch as powerfully – surprisingly and fascinating – audiences and critics as the Solponticello publisher, Erik Hinds, based in Athens. Shortly after the previously enthusiastic opening of the catalog, the first solo work of the Italian-born double bassist Klaus Janek was undoubtedly added to the prestige of the almost invisible record label without much fuss.

Born and raised in Bolzano, Janek switched to double bass after initial attempts at soprano and alt flutes and various percussion. Thanks to the exchange of instruments, he soon became a member of local rock and jazz bands. The creative exploration of the aural capabilities of four- and five-string double basses began in 1988 and then studied with masters such as Mauro Muraro, Jaribou Shahib and Ludwig Streicher. In a few years, Klaus Janek has been working on such iconic improvised jazz icons as Peter Kowald, Lawrence D. Butch Morris or Dave Holland; and collaborated with artists like Wolfgang Fuchs, Christoph Irmer or Martin Blume. In addition to a variety of experimentally based collaborative music, Janek has consistently composed applied music for Italian, German, French and British theater and dance productions; in addition, he has been playing concerts for the double bass, Caspar, since 1994, and had to wait until 2001 for his recordings.

The album consists of Caspar’s seven untitled titles and a remodel by Marc Johnson of Prayer Beads closing the disc. After the first few minutes, it becomes clear that the musician is able to display the many shades and moods of his instrument from the almost overwhelming, very aggressive and loud overture of the piece (Part I) to the longest and most complex sixth movement (Part VI). ) to almost moments of silence. The first two movements are an improvisational unfolding of each theme, followed by an intermezzo-like section, in which Janek’s bump is first introduced. The fourth movement is a moving, noise-based part that is one of the most vibrant and provocative minutes of the whole album. The sixth movement is a piece divided into four subdivisions, which is clearly the most thoughtful, complex part of the album. The perfect counterpoint to the seven-track piece is the peaceful closing of the album, which uses Johnson’s track, an extremely jazz melody that is extremely simplistic. For his recordings, Janek, a five-string double bass player, had a pre-conception of making the Caspar record without any effects or post-production. Interestingly, the items were recorded individually in different studios for a total of four years.

As the title suggests, the work was inspired by the tragic story of Kaspar Hauser, a German who first met Klaus Janek around 1988. The story of an eternal outsider who, in his short life, tried to integrate into society, was so captivated by the musician that over the next six years he experimented with many linguistic and dramaturgical aspects that express Kaspar Hauser’s tragedy with perfect sensibility: a boy hardly able to speak was found in a side street of Nuremberg with an anonymous letter in his hand, containing only a date of birth. The boy could only say his name, his vocabulary consisted of a few words. The boy had learned to speak among people with incredible speed, and was thus able to articulate the events of his short life objectively but sensitively: unknown to him from about three years of age, for over twelve years, in a tiny dark cavity away from light, fresh air, and . He couldn’t stand or walk in his cell; its food consisted of bread and water; he had no knowledge of time, space, days and seasons. Until his release, he had no recollection of human contact, for he was only given food and drink and changed his clothes when he was asleep. Before his release, someone had taught him all that his name was Kaspar Hauser. After his inexplicable imprisonment, Hauser tried to integrate into society through his recipients, trying to get to know and understand the human world, but five years after his release, an unknown man stabbed him to death. According to Janek, Hauser’s struggling cognition, learning, and integration process is a perfect analogy of how a student tries to see, recognize, or “insert” an abstract piece of music. According to Janek, the story of Hauser is the story of decoding.

Caspar’s 43-minute audio is not the imprint of a simple mapping of the instrumental sound generation potential, but fortunately much, much more. Unbearable, original and creative, yet free of self-indulgence, this untold music tells a story that deserves and deserves attentive and devoted listening. In addition to these positives, it is not unimportant that Klaus Janek becomes one of the prominent figures in the double bass society and as a major instrumentalist in the global improvisation scene, such as Mark Dresser, Dominic Duval, Joëlle Léandre or the late Peter Kowald. 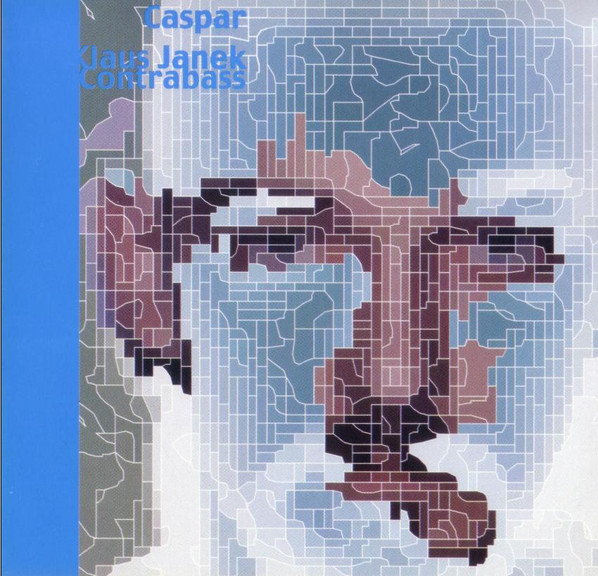