a three days long simulation in the public space of Berlin from matthaei & konsorten
Since 1999 Germany is in war state – but at home there is not much of notice about it. The 3 days interactive walk guides with mobile phone and internet through known and unknown places in Berlin. In meetings with embedded protagonists, with divers war experience (soldiers, journalists, doctors ecc), the audience decides for themselves which scenarios to encounter in this special ‘war theatre’, others are part of the image.  The setting provokes an ambiguity in layering daily life situation of Berlin with remembers of daily life normality in war zones. The remembers of the protagonist go as far as describing “juicy” explosion, to most random joys as all friends tv series watching in Kandahar ecc.
The format implies because of the nature of it several community building: protagonist (informed), audience (half informed – bought tickets, but don’t know what will happen) and not informed (just walking by people who dedect a not clearly defined common ground of the walking by group) 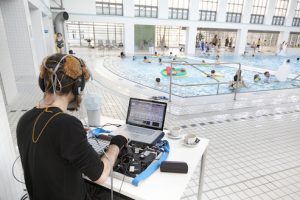 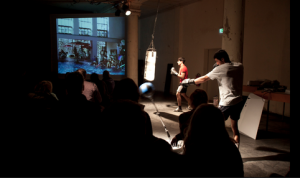