outside the box with Matthaei & Konsorten/fft Düsseldorf

in estonia, just as in the majority of ex-soviet countries, the audience for contemporary performing art appeared together with the artists. this means that the audience is from the same generation as the performers. we have discovered that even though our audience is growing the average age of our visitors is getting younger. most artists who were active in the early 90s have meanwhile disappeared and so has their audience. kanuti gildi saal wants to bring back the older audience and hold on to the younger one at the same time.  the question is, how? the artists jörg lukas matthaei, daniel hengst,sophie jahnke and klaus janek travel from düsseldorf to tallinn to work on this question.

KJ analyzed the sound identity and biography of the city of Tallinn. All soundobjects used in further composition came out from a specifically created sample tank. Soundsnippets were taken starting from the famous mass singing contest were literally thousands of choir members come together to sing, as well as contemporary pop music production as well as city sounds, relevant political statements or seventies to eighties estonian pop stars. 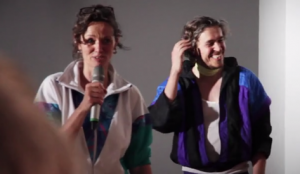