October, 2021
SPACE CONCERT INSTALLATION by and with the Ensemble Extrakte
based on the DULAB ALTAJ – improvisations in the form of a musical round dance
after a dulab melody by Farhan Sabbagh
Synopsis

The Berlin-based Ensemble Extrakte is convinced that new music in the social reality of our cities can no longer emerge from Eurocentric ideas alone. In this concert-like spatial staging, Ensemble Extrakte continues its artistic exploration process between avant-garde art music of Western influence and music of other cultures and genres. Ensemble Extrakte searches for ways to link the many musical worlds existing simultaneously in a city, freely and listening to each other at the same time – so that each musician remains with himself, takes from others and gives.

The audio-visual space installation is based on a film with 12 musicians, which was recorded at 12 places favored by the musicians, with which they associate home. The initial musical format was the dulab, an Arabic rondo form in which a melody is commented on from instrument to instrument and passed on to the following musician. In the sense of a musical gift, each musician formulates his or her personal accents as a template and invitation for the next one, as in the game “Silent Post”.

During the concert, the musicians react to three film projections distributed in the room – three-part stratifications. They continue their musical lines realized in the film and spin them further. In fact, the film projections are recordings of three musicians each, recorded solo and related to each other as trios. The musicians weave new musical rondo variations live in various constellations, from solo to tutti, in harmony or contrast with the film material. Sometimes the projections pause and the ensemble – inspired by the creative and open form of Dulab – has all the space for free musical development.

The result is a spacious breathing between the common source material, the Dulab melody, the interrelated musical commentaries, a mixture of live analog music and digital post-production contributions. From a wealth of diverse acoustic and visual homes, a musical whole emerges that is stimulated and co-shaped by all these individual templates.

Sponsors and supporters:
-> With the kind support of the Ernst von Siemens Music Foundation and.
KINDL – Center for Contemporary Art.
-> The film was supported by the Kulturstiftung des Bundes.
-> Thanks to inpetto filmproduktion and x-tract-production
Comment Team 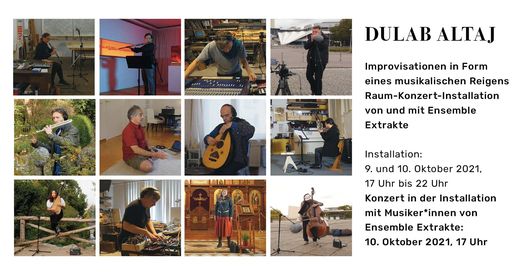