the movie by Inpetto fimproduktion premiered on march 26th through Maerzmusik Festival, Berlin

“Dulab al Taj” is many things at the same time: a film and an audio-visual composition, 12 solos and a group improvisation. The musicians of Ensemble Extrakte, who come from Australia, Bulgaria, China, India, Iran, Korea, Singapur and Syria and now live in Berlin, play with and for each other in creating a multilingual musical cosmos.

It all begins with Farhan Sabagh, a Syrian musician. In his studio he plays the musical theme he has composed for this project on the oud and immediately starts improvising upon it. The musical form in which this happens is called dulab (dulab can mean “wheel”, “round” and also “song”) and it is similar to a European rondo. This short melody sets off a filmic round that links the 12 musicians together. Because this first improvisation travels – like in the game “Chinese Whispers” – from place to place and from musician to musician, passing through different musical worlds and idioms while it mutates, develops and takes on different colours. Each occupying a place or space in which they feel at home, one after another the musicians pick up the improvisation, elaborate on it, overwrite it with an improvisation of their own, and pass it on. In the film, the different solos are enhanced with accompanying vocals, performed as additional layers over the earlier recordings. As in a rondo, the original melody is repeatedly recalled.

Here a musical encounter has been created that allows the differences between the musicians’ individual musical languages and traditions to be appreciated clearly while at the same time weaving them together.
This project was developed and realised by the composer Cathy Milliken, the composer Sandeep Baghwati, the curator Elke Moltrecht, the filmmaker Uli Aumüller and Ensemble Extrakte. 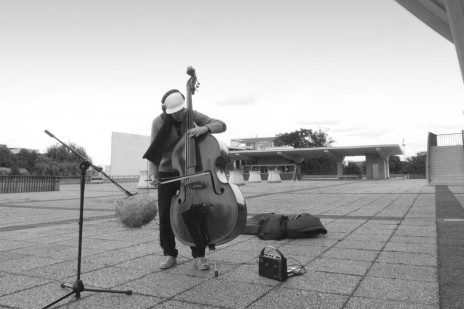 for more information about the movie, trailer ecc click here